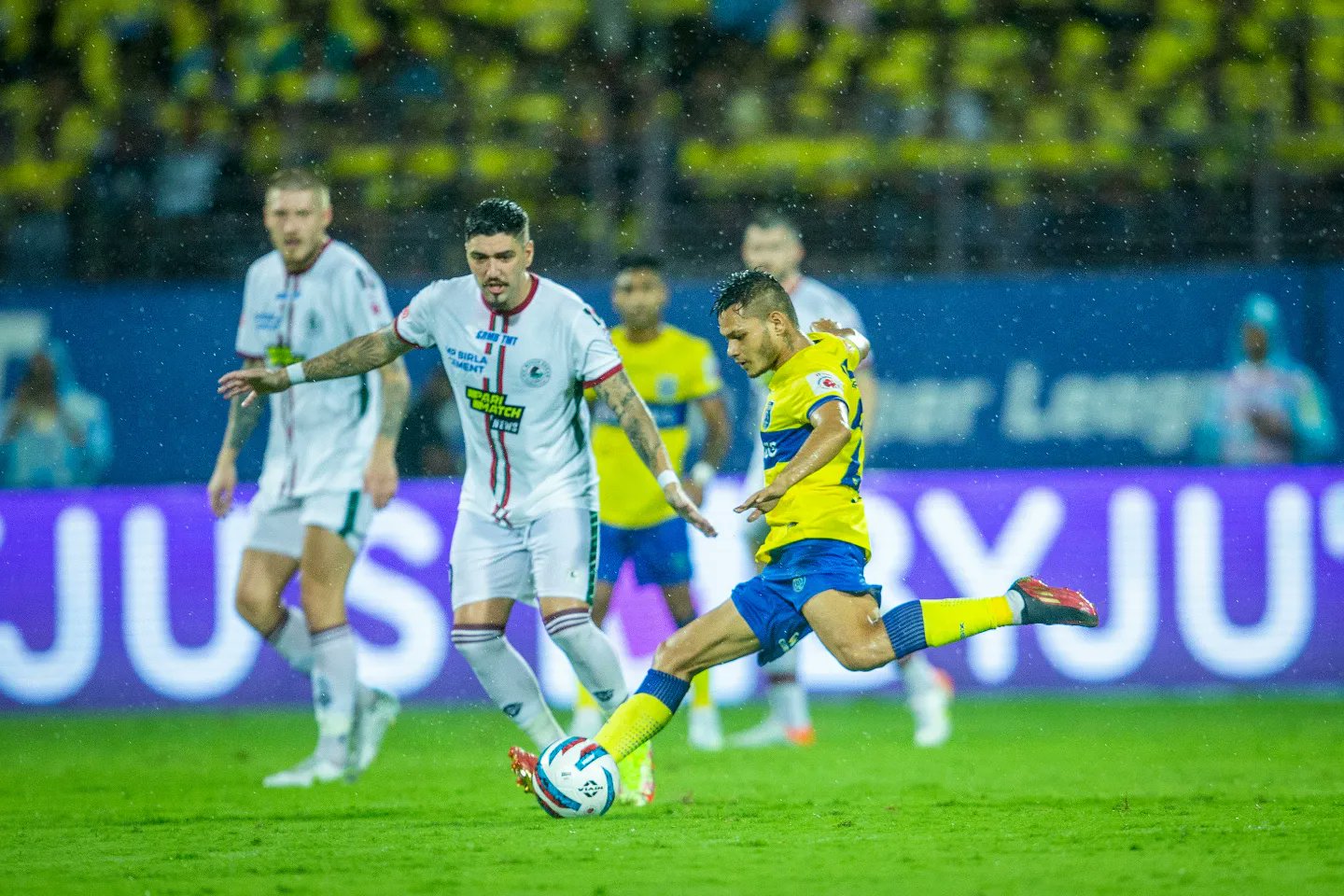 THE REWIND: KBFC VS ATKMB

After scoring first goal and taking the lead within 6 minutes to the game, Kerala Blasters were unfortunate to go down for a 2-5 score line against ATK Mohun Bagan FC on Sunday night. ATK Mohun Bagan FC Coach Juan Ferrando opted for a 3-4-3 against the 4-4-2 formation from Blasters tactician Ivan Vukomanović. The men in yellow opted to start with the star performer from last match, Ivan Kalyuzhnyi with Apostolos Giannou on the bench.

With the loyal fans painting Kochi in yellow again, Kerala blasters stormed the ATK Mohun Bagan FC goal line from the very first second of the game. And this resulted in a goal with just 6 minutes on clock. After successfully winning the ball from Ashique Kuruniyan, Dimitrios Diamantakos guided it to Ivan Kalyuzhnyi who had a one two pass with Şahal Abdul Samad inside the penalty box and fount bottom of the net. With a one goal lead on the score board, Blasters kept testing ATK Mohun Bagan FC defence. Keeping ATK Mohun Bagan FC custodian Vishal Kaith busy and Ashique Kuruniyan in his new left back role struggling to mark Sahal Abdul Samad, the blasters took the visitors out of game for the first 25 min.

When it looked like the score card is going to remain same till the half time, ATK Mohun Bagan FC scored the equilizer at the 19th minute of the game. A quick counterattack against the flow of the game got them the equalizer they needed. Hugo Boumous rushed to the penalty box and passed the ball to Dimitri Petratos through a re-organizing Blasters defence. Experienced Australian made no mistake in guiding it to the net when the clock had 19 minutes more for the half time.
With both teams fighting toe to toe for the next goal and defenders tested on both ends, Manvir Singh slipping the ball through Blasters defence to find Joni Kauko on 38th minute made the score board tick again. This time for visitors which resulted in them taking the lead. Score board remained 1-2 in favour of the visitors when the half time whistle was blown.

Subhasish Bose replaced Ashique Kuruniyan for ATK Mohun Bagan FC soon after the half time. An experienced defender in back line gave the visitors more confidence in attack which resulted in a second goal from Dimitri Petratos in the 62nd minute which increased their lead. From a pinpoint pass from Liston Colaco inside the penalty box, the Australian who managed to slip through blasters defence line found the target at ease.With men in yellow down by 2 goals, Coach Ivan brought in fresh legs with a double replacement in 65th minute. When Blasters went with Rahul KP replacing Sahal Abdul Samad and Nishu Kumar replacing Harmanjot Singh Khabra, ATK Mohun Bagan FC replaced Deepak Tangri with Lenny Rodrigues. Trying to get the game back from visitors, blasters replaced Ivan Kalyuzhnyi with Apostolos Giannou on the 69th minute. This was countered by Florentin Pogba replacing Hugo Boumous for ATK Mohun Bagan FC on the 71st minute.

An individual brilliance with a blistering run and a powerful shot from Rahul KP slipped through the hands of Vishal Kaith made the score board ticking in favour of blasters. With 3-2 score line and continuous shots on target made it look like the ‘MEN IN YELLOW’ are all set for a comeback. But, soon after Lalrinliana Hnamte replying Manvir Singh on the 86th minute, visitors increased their lead through Lenny Rodrigues.

Game progressing to 2nd minute of the added time. An assist from Liston got the Dimitri Petratos registering the first hattrick in ISL 9. With 5 goals against 2, score board remained in favour of the visitors.Not a result which Kerala Blasters played for and not a result our fans wanted. But, losing is an opportunity for us from our mistakes. As coach Ivan say, ‘Football is a game of continuous learning and improvisation’.