Hormipam Ruivah (born 25 January 2001) is an Indian professional footballer who plays as a defender for Indian Super League club Kerala Blasters and the Indian national team.Ruivah hails from Somdal Village in the Ukhrul District of Manipur and has been playing football since his early childhood. He joined Minerva Punjab FC in 2018 and went on to establish himself as a regular for their youth team. 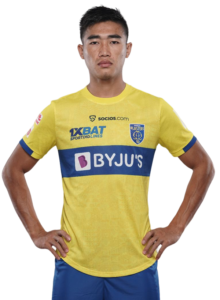