Adrián Nicolás Luna Retamar (born 12 April 1992), is a Uruguayan professional footballer who plays as a midfielder for Indian Super League club Kerala Blasters.Born in Tacuarembó, Luna began his youth career at academies of Progreso, Montevideo Wanderers and Defensor Sporting in Uruguay. He was eventually promoted to Defensor's U-19 and first team in 2010. 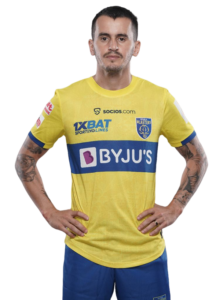