Sandeep Singh began his football journey with the Shillong Lajong FC’s Academy and was promoted to their senior team in 2014. He was part of ATK FC’s squad during the 2018-19 Hero ISL but didn’t get any games. Thereafter he featured for TRAU FC in the Hero I-League. The right-footed defender at last made his Hero ISL debut with Kerala Blasters FC in 2020-21 and went on to play 14 games. He impressed one and all with his performances. 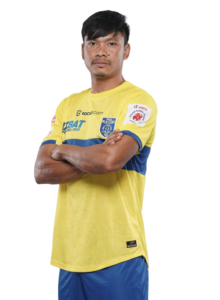