Prasanth Karuthadathkuni started playing football in 2008 and represented the Kerala U-14 team before being chosen by the AIFF Regional Academy. He signed for Kerala Blasters FC in 2016 and spent the season on loan at Chennai City FC. He began his Hero ISL journey with Kerala Blasters FC in the 2017-18 season, making 10 appearances. He was a regular for the club during the 2018-19 season as well. Prasanth played 13 matches for the side in the 2020-21 Hero ISL season. 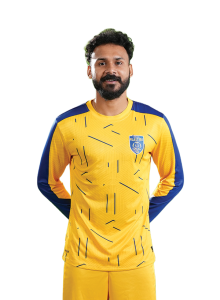