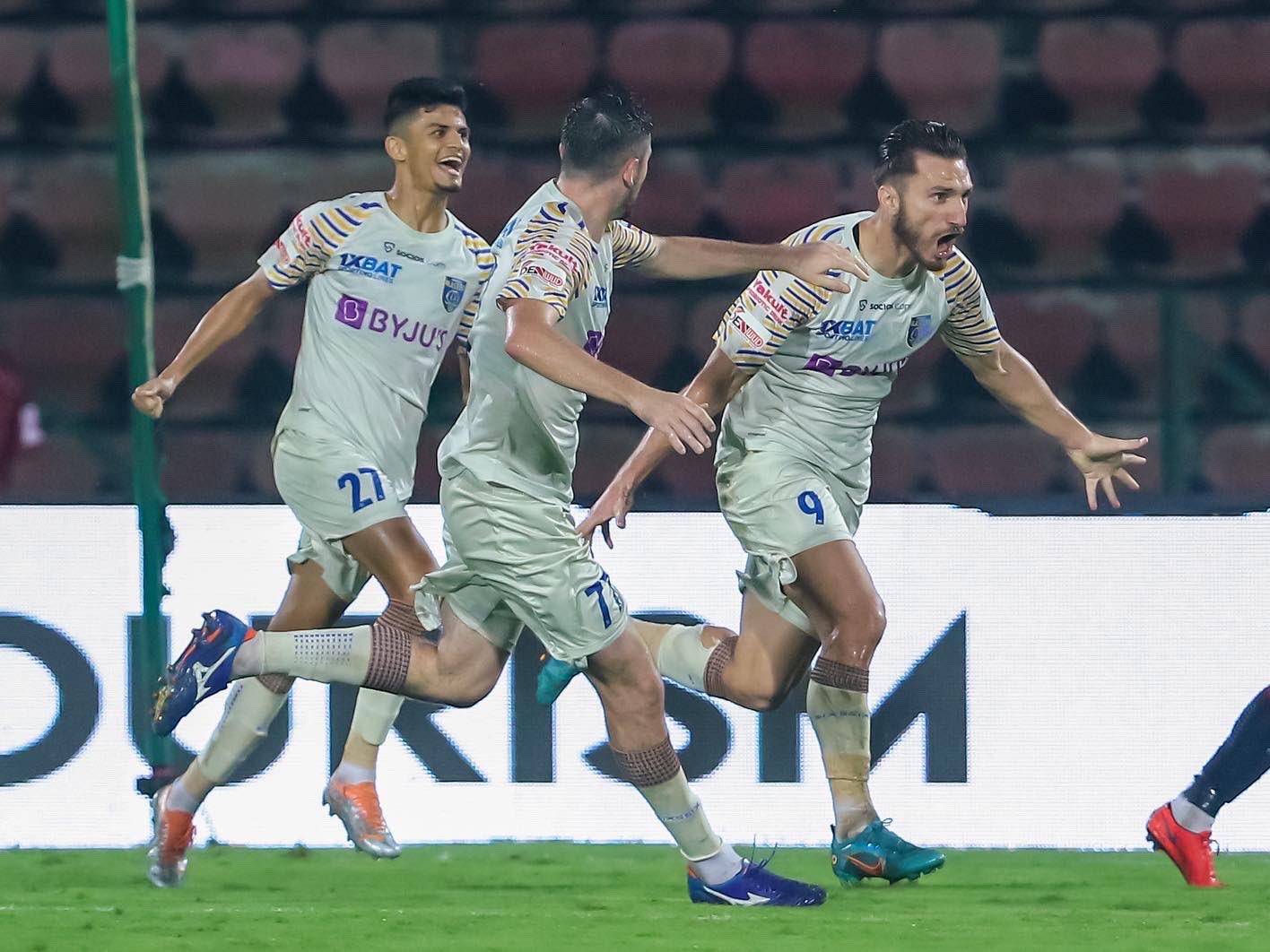 THE REWIND: NEUFC vs KBFC

With Dimitrios Diamantakos opening his account for KERALA BLASTERS FC and Sahal Abdul Samad scoring twice , ‘MEN IN YELLOW’ are back in the winning track by defeating NORTHEAST UNITED FC 3-0 at Indira Gandhi Athletic Stadium in Guwahati.

With assistant coach Paul Groves in-charge of the team due to a suspension for coach Marco Balbul, NORTHEAST UNITED FC opted to go for a 5-3-2 formation. On other side Coach Ivan Vukomanović re-arranged the Blasters unit within his effective 4-4-2 formation. Blasters restructured the starting line-up with Sandeep Singh , Nishu Kumar and Hormipam Ruivah returning to the defence, Rahul KP, Ivan Kalyuzhnyi, Jeakson Singh and Saurav Mandal taking care of the Midfield and Captain Adrian Luna joining Dimitrios Diamantakos in attack.

With both teams had their defence unit busy and effective against the opponent attack for the first 45 minutes, first half remained scoreless. Romain Philippateaux hitting the cross bar in the 8th minute was the only time when either team came close to the score line.

Second half started with a shot from Emil Benny in the 51st minute for the ‘HIGHLANDERS’ narrowly missing the target.Things changed in favour of the Blasters in 56th minute. Dimitrios Diamantakos guided ball to the net with a soft touch from an assist from Saurav Mandal.With a super sub warming up on the side-line for Blasters, score board was not going to remain the same for long. Sahal Abdul Samad replaced Saurav Mandal in the 65th minute to mark the most appearance in ISL from a player in Kerala Blasters jersey.

Blasters also replaced the goal scorer Dimitrios Diamantakos with Apostolos Giannou in attack. Aron Evans tested Prabhsukhan Singh Gill on the 71st minute with a tricky dipping volley. And presence of mind from the Blasters custodian save an attempt from Norteast United FC on 82nd minute. A dangerous run by Emil Benny from a clearance error from blasters in the 83rd minute was safely brought down by Sandeep Singh inside the penalty box. With 5 minutes more to the regular time, the super sub found the target. A goal by the Kerala deo. Assist from Rahul KP guided to goal by Sahal Abdul Samad. Blasters made a double replacement Víctor Mongil and Puitea replacing Hormipam Ruivah and Ivan Kalyuzhnyi in the 87th minute. Jessel Carneiro came in replaced Nishu Kumar with 3 minutes to the extra time.

An attempt from Rahul KP in the 95th minute was saved by Northeast United FC custodian Mirshad Michu. But score board clicked in favour of Blasters on the very next minute. Sahal Abdul Samad finding the net for the MEN IN YELLOW from an assist by Sandeep Singh. With time clicking away, final whistle was blown with KERALA Blasters FC walking with 3 points and a clean sheet.