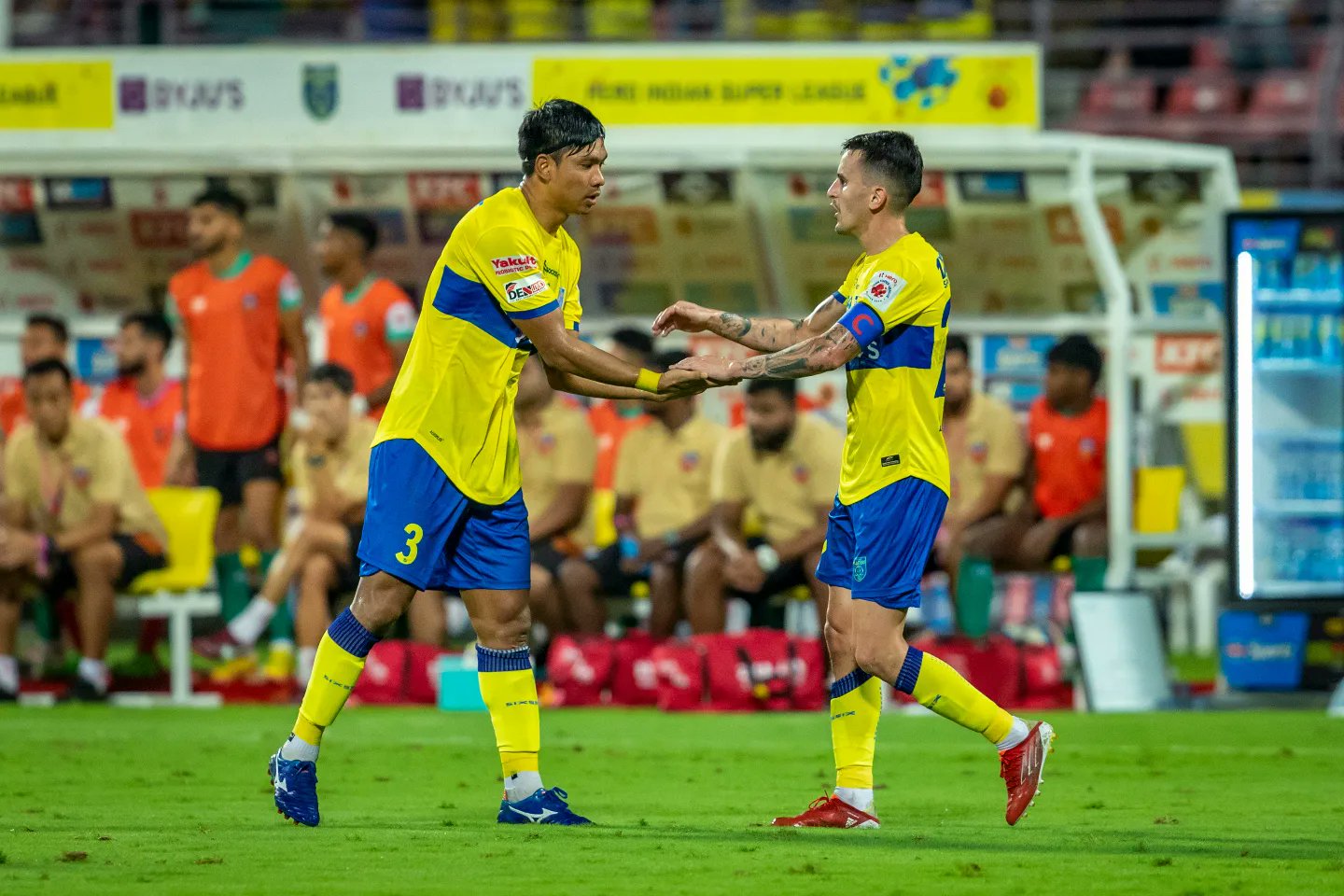 THE REWIND: KBFC VS FCGOA

Kerala Blasters FC successfully secured 3 points by winning against FC GOA on a 3-1 score line at Kochi.FC GOA made their message clear when Coach Carlos Peña opted to go with a 4-2-3-1 formation with all four foreign players in attacking roles. On other side Coach Ivan Vukomanović opted to field Blasters unit with his effective 4-4-2 formation. Only change in the starting line-up for Men in Yellow from last match was the ‘Supersub’ from last match returning to the starting line-up with a confidence boost. Sahal Abdul Samad started instead of Saurav Mandal in the Midfield for Blasters.

With Iker Vallejo narrowly missing the target on the 4th and 7th minutes, FC GOA made their presence felt from the very first minute from kick-off. Blasters also came close to that opening goal with Sahal Abdul Samad testing Dheeraj Singh twice in the 7th minute. And a header attempt from Marko Lešković missing the target in the 8th minute by whiskers. A shot on target from Álvaro Vázquez and an ‘Olympic goal’ attempt from Edu Bedia in the 10th minute were brilliantly denied by Prabhsukhan Singh Gill. With FCGOA dominating the possession chart throughout the game, a disciplined KERALA BLASTERS unit made sure that the possession remained within the Goan defence line. Combined with the Blasters defence under a brilliant performance from Marko Lešković ensured that Goa attackers are silent for major share of the match. With Nishu Kumar clearing a dangerous move from Noah Sadaoui in the 11th minute. Blasters waited patiently to get back in the game. Meanwhile an attempt from Dimitrios Diamantakos for Blasters in the 19th minute went Fractionally wide from the target.

FC GOA had their first setback on the 21st minute when Saviour Gama had to be replaced by Sanson Pereira due to an injury. A header attempt from Adrian Luna on a cross from Rahul KP missed the target in the 22nd minute keeping the scoreline at level. Rahul KP was a constant threat for the opponents as he was disturbing their defence through right wing whenever he has the ball. With the clock ticking, the inevitable happened in the 42nd minute. ‘THE MAGICIAN’ in jersey number 20 strikes for the ‘MEN IN YELLOW’. A ‘tap in goal’ from Adrian Luna got Blasters the first goal in the match and the lead. Dimitrios Diamantakos was first unlucky when a shot from him on a pass from Adrian Luna hit the near post, however time proved that the ‘Greek Snipper’ cannot be kept long from scoring. Referee pointed towards the penalty spot on the 45th minute in favour of Blasters when Dimitrios Diamantakos was brought down inside the penalty box. With FC Goa custodian Dheeraj Singh Moirangthem going in the the wrong direction, Diamantakos ensured to hit the target to increase the lead for blasters. Score board stood in favour of Blasters till half time.

Blasters registered their 3rd goal on the 52nd minute. Ivan Kalyuzhnyi made it clear that he is a player whom the opponents defence need to be worried about. A powerful shot from the ‘Ukrainian Powerhouse’ found the bottom of the net even before Dheeraj Singh could react. With 3 goals down, FC GOA fought back with all the arsenal they had. Álvaro Vázquez found the target in the 59th minute for ‘Gaurs’. But, the offline flag was up before the ball even crossed the goal line. A shot on target from Iker Vallejo in the 62nd minute was brilliantly denied by Prabhsukhan Singh Gill who stood calm and confident. 63rd minute was the time for Dheeraj Singh to display his brilliance for Goa to deny an attempt from the blasters. With repeated attempts on goal, Goa found the target on 67th minute. A header from Noah Sadaoui took the clean sheet away from Blasters.

Ivan introduced fresh legs with a double sub in the 70th minute. Apostolos Giannou and Puitea replaced Dimitrios Diamantakos and Jeakson Singh. When Adrian Luna missed the target in the 72nd minute. A brilliant attempt from Edu Bedia in the 76th minute through a freekick was denied by blasters custodian Prabhsukhan Singh Gill yet again.Rahul KP again got the blasters fans to the edge of their seats in the 78th minute with a brilliant move. Apostolos Giannou was unlucky to miss the target on a cross from Rahul KP.

Coach again went for a double substitution with bringing in Saurav Mandal and Jessel Carneiro for Sahal Abdul Samad and Sandeep Singh. Also replacing Ivan Kalyuzhnyi with Víctor Mongil on the 89th minute. Both teams came close to scoring again on the 95th and 96th minutes. When Edu Bedia missed the target on a freekick in the 95th minute, Saurav Mandal was unlucky in connecting a pinpoint pass from Adrian Luna in the 96th minute. With 3-1 score line, score board remained in favour of KERALA BLASTERS on the final whistle with the Hosts walking back with the valuable 3 points.