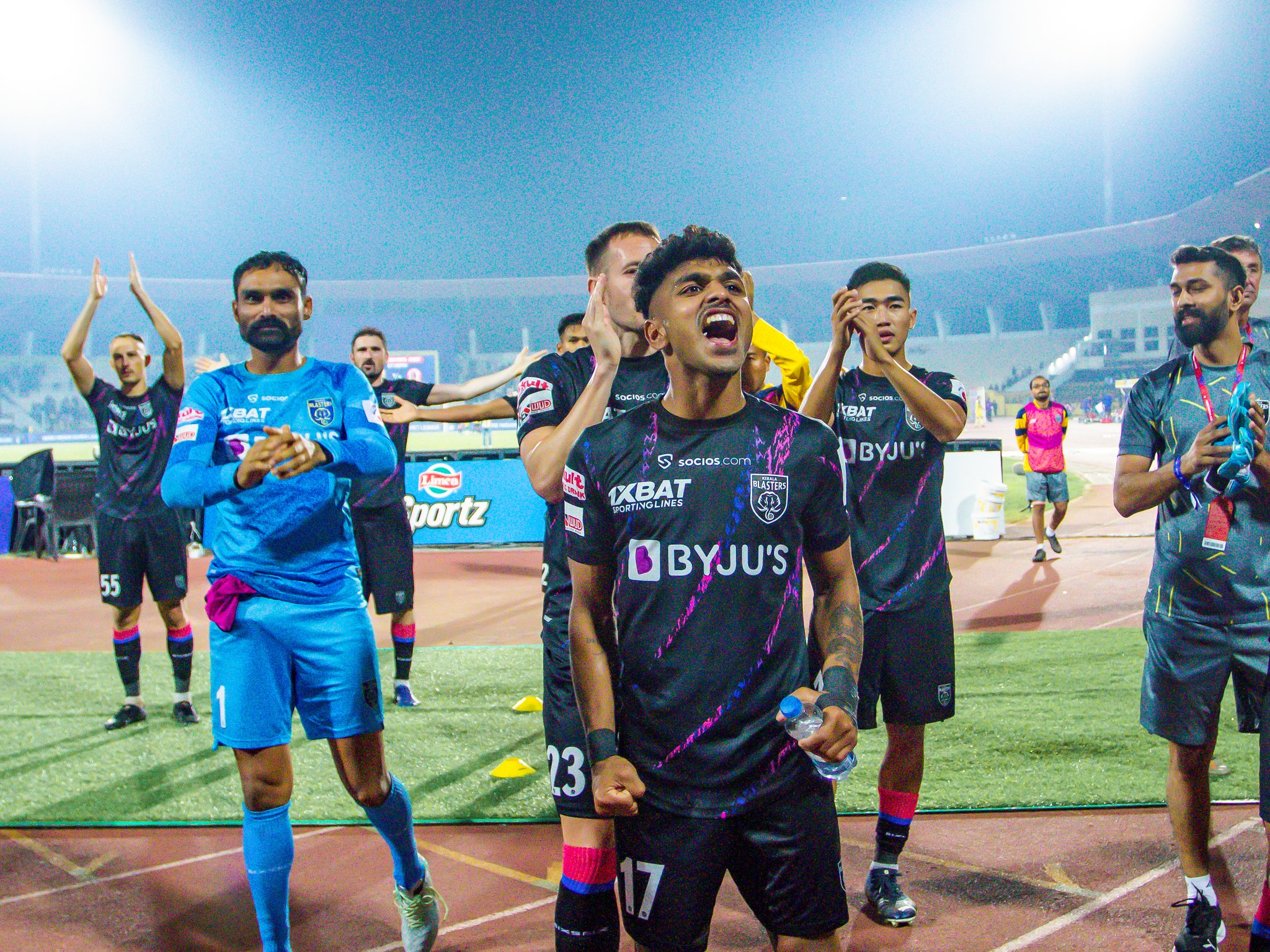 A Compact and Disciplined display of football from KBFC brought an end to the unbeaten streak of HFC at Gachiboli Stadium.When HFC Coach Manolo Márquez opted to go for a 4-2-3-1 formation, Coach Ivan Vukomanović opted to field Blasters unit with a 4-2-2-2 formation. With Nishu Kumar, Marko Lešković, Hormipam Ruivah and Sandeep Singh in charge of the defence unit, Ivan Kalyuzhnyi paired with Jeakson Singh in the defensive midfield role. With the local boys Sahal Abdul Samad and Rahul KP teaming up as attacking midfielders, Dimitrios Diamantakos and Captain Adrian Luna were deployed in finisher roles.

A shot from Bartholomew Ogbeche narrowly missing the target in the 7th minute got HFC close to the score line in the starting minutes itself. However, Dimitrios Diamantakos made no mistake for Blasters in the 18th minute on a rebound and found the target for the 3rd match in a row. With a one goal lead, Blasters attackers kept testing HFC defence. Rahul KP, who is proving again and again that he is a ‘CHALLANGE’ which the opponent defence needs to be worried about, made his presence felt in this match too. The man in jersey number 17 for blasters continues to fly under the radar of any defence unit with ease in game after game. A run from Rahul KP in the 20th minute got Blasters close to the score line. But, brilliant anticipation from Anuj Kumar in front of the crossbar rescued HFC. An acrobatic attempt from Bartholomew Ogbeche in the 22nd minute was stopped by Prabhsukhan Singh Gill inches away from the goal line. Blasters custodian displayed his brilliance again in the 32nd minute with a clearance when Barth Ogbeche was charging against a ball not that far away from the Blasters goal post.

Attacks swinging in both directions, Blasters were forced to replace the goal scorer Dimitrios Diamantakos with Apostolos Giannou due to an injury in the 34th minute. While Hyderabad FC leading the possession graph, Blasters came close to scoring again in the 37th minute. A header attempt from Sahal on a cross from Luna went inches away from target. With only seconds left for the half time whistle. Barth Ogbeche came close to the score line for the hosts with a header, only to miss the target again. Score board remained 1-0 for the half time whistle.

A brilliant run from a counterattack by Joel Chianese in the 51st minute failed to yield any result for the host when he chipped the ball straight in to the hands of Prabhsukhan Singh Gill. 52nd minute had action on the other end of the field. A pin pint cross from Rahul KP and a shot on target from Apostolos Giannou got Blasters fans to the edge of their seats. But, Hyderabad Custodian Anuj Kumar made sure the ball did not cross him. Rahul KP tested the Goalkeeper again in the 66th minute with a powerful long ranger and Anuj Kumar fisting the shot above the crossbar. Blasters replaced Sahal Abdul Samad with Saurav Mandal in the 73rd minute to add freshness to the game.

Aaren D’Silva failing to connect a cross inside the penalty for the hosts in the 92nd minute took away another chance from HFC. To tackle Hyderabad FC’s ‘full on attack’ mode to secure an equalizer, blasters brought in Víctor Mongil to the field replacing Adrian Luna in 93rd minute. HFC using all their arsenal with time drifting away from them, a no-nonsense defence with a compact and disciplined Kerala Blasters ensured to walk out of the field with 3 points and a clean sheet when score board remained 1-0 in favour of visitors at the final whistle.