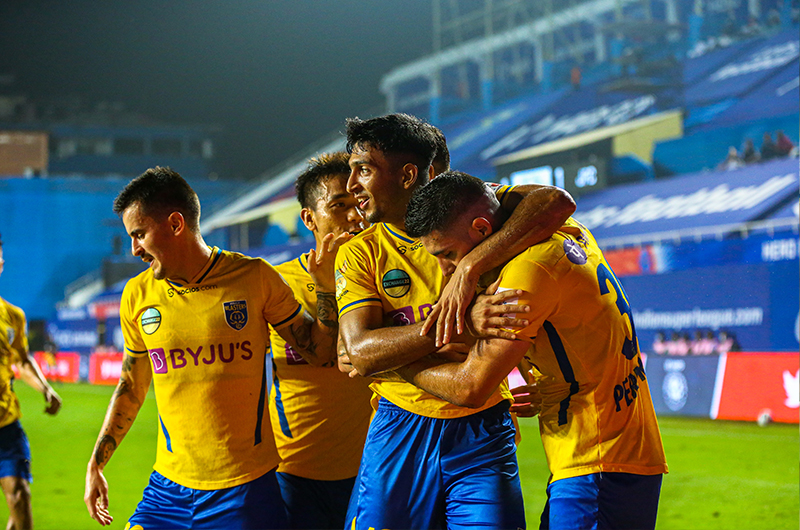 The brand new edition of Hero Indian Super League is almost here. The league will officially kick-off on 7th of October, 2022 at JLN stadium, Kochi. KBFC will square off with Emami East Bengal in the inaugural match of ISL 9 and we all are very excited about the game as fans will be returning to the home after 2 long seasons.

Kerala Blasters finished the previous season as runners-up, but now will be looking forward to winning their maiden trophy. The preseason preparations are in full swing, and KBFC is sweating it out in their UAE preseason tour. The team in yellow has revamped the squad with some crucial incomings and outgoings.

Let’s have a look at the newest additions we made to the squad!

The Greek-Australian centre forward was the first foreign player we signed for the season. Giannou, 32 year old forward is coming to the club with ample amount of experience in his back. He started his career with the Oakleigh Cannons and South Melbourne and made his professional debut for the Greek first division side Apollon Kalamarias in 2007, scoring his first goal in late 2008 for the club. He also has represented Greece and Australia in the international level at various occasions and have scored for Australia in a friendly against Kuwait and in the 2019 AFC Asian Cup against Palestine. Giannou will be a great addition to the squad as he brings home a bag of experience playing in various countries across the globe.

Ivan Volodymyrovich Kalyuzhnyi, who is a central midfielder and hails from Ukraine. This 24 year old professional was our second addition to the foreign contingent and he is on loan from the Ukrainian premier league club FC Oleksandriya. Ivan made his professional debut with Metalist 1925 Kharkiv back in the 2018-19 season and scored a goal for them. This young midfielder will be pivotal in Vukomanovic’s plan of action and the gaffer will be looking forward to accomplishing his versatility.

Victor Mongil needs no introduction to the Indian Football fans, he has been here for the past 3 years. In his first stint in India with ATK, he emerged as the ISL champion in the 2019-20 season. Later, he came back to India last season and captained Odisha FC after a season with his former club Dinamo Tbilisi. The Spanish defender has represented his country at the age level and grew up through Valladolid’s youth system. One of the notable achievements during his career was playing in UEFA Europa League qualifiers with the Georgian top division club Dinamo Tbilisi. Victor assures a handful of experience and versatility on the table for our club.

Dimitrios, 29 year old striker hailing from Greece is our “last piece of puzzle”. A pure, pacey forward, with a handful of experience will surely help the team and our youngsters to improve and grow. With the likes of his compatriot Giannou joining him in the front line, Dimitrios assures us a goal. Diamantakos started his career at Atromitos Piraeus, later he joined the youth teams of Olympiacos in 2009. He has joined our ranks from the Croatian top division club HNK Hajduk Split. This Greek international has plied his trade across Europe with an amazing spell in the Bundesliga 2, and always had eyes on goal.

The Mumbai born winger joined our ranks from the I-League side Churchill Brothers FC. Bryce grew up Mumbai FC’s youth setup and has played for their developmental teams upto U-18 level. He was signed for Churchill in 2020, made his debut in their colours against Indian Arrows. During his spell in the I-League, Bryce has 3 goals and 4 assists to his name. Also, he has represented India in the U-23 category and made his debut against Kyrgyzstan in 2021. He has joined us on a multi-year deal which will keep him with us till 2026.

This 21 year old boy has joined us from Churchill Brothers along with Bryce. Saurav, a natural winger who can play on either wing, will bolster our squad without a doubt. Born at Jalandhar, Punjab he started his career through JCT Football academy and in 2020 he joined the I-League outfit Churchill.

The Manipur born striker is a well known name among the Indian football fans. Bidyashagar is the academy product. of East Bengal, has represented them in various age categories. Later in 2020, he joined I-League side Trau FC, scored 12 goals from 15 matches and became the top scorer and player of the season 2020-21. He was the only Indian player to score 2 hat tricks in a single season. Following this amazing spell of his career he joined Bengaluru FC and now has signed for us for a season-long loan deal. With the scoring boots and ambition for goal, we hope Bidya will create wonders this season.

With the likes of Adrian Luna, Marko Leskovic, Sandeep Singh, Jeakson Singh, Prabhsukhan Gill,Bijoy Varghese, Karanjit Singh extending their stay with us and the bunch of youngsters we have, the rushers will be aiming for the championship which we missed last time by a whisker.

Also we have a new addition in our coaching team. The Belgian coach Frank Dauwen has joined our ranks as assistant coach for the coming edition of ISL. He has ample experience in working with different teams like Al Ahl, Westerlo etc.. He will replace Stephen Van Der Heyden.

Apart from all these additions, we bid adieu to some of our favourite men who have always donned the yellow with pride.

It was always Jorge Diaz and Alvaro Vazquez in the attacking line for us, now both of them have joined other ISL teams. Alvaro Vazquez who was lethal in the attack for us last season has joined our fellow ISL side FC Goa. The Spaniard was an integral part of Ivan’s plans last season and gave us a memorable season with his masterpiece volleys and vital goals. The Argentine was one of our important signings last season and he has helped a lot to take the club into the finals. Jorge Diaz will be wearing Mumbai City’s colours this time. The young full-back Sanjeev Stalin will follow Diaz’s way as he is also signed by the Islanders. Sanjeev got opportunities after Jessel’s injury and always lived up to the expectations. He was a workforce who always made his presence felt in both attack and defence.

Chencho Gyeltshen, our Asian signing last year has left the club after a memorable season. Even though he got only a few chances during games, he has always been a good guy who is ready to give his everything on the pitch. We wish the Bhutanese striker nothing but best for his future. The last player to leave from our foreign contingent last season is Sipovic. The Bosnian defender has been a towering presence in our back-line. Sipo has scored a goal for us against East Bengal which was a crucial one. Another player leaving from our defence is the local lad Abdul Hakku. Hakku joined our ranks during the 2018-19 season and scored a goal against Hyderabad FC in the 2020-21 season. In 2021, he was loaned out to the I-League side Gokulam Kerala FC and now has moved out permanently.

Vincy Barretto, the Goan lad has completed his move to Chennaiyin FC. Vincy is a pacey winger and was instrumental during our run in RF Development League. He has also got 2 goals in his name for the Blasters in ISL. Yendrembam Denechandra Meitei will be playing for Odisha FC in the upcoming season as he has completed a loan move to the Juggernauts side. Denechandra joined the men in yellow during the 2020-21 season. Sreekuttan VS who came up through our reserve team will join the I-League side Gokulam Kerala FC after a season-long loan spell this year. Sreekuttan was part of our reserve squad who played in Kerala Premier League 2020-21. With an impressive performance for the reserve team Sreekuttan was called up to the senior team who took part in the 130th edition of Durand Cup. He made his debut against the Indian Navy football team and earned a penalty kick which later Luna converted to goal.

Albino Gomes who served us for 2 seasons has also made his way out. Albino has been a vital presence under our bars and always saved us with his quick reflexes and long hands. Another one leaving the rushers will be Seityasen Singh. Seitya was signed by Blasters prior to the ISL season 6. He scored one of our goals in that thumping 5-1 victory against Hyderabad FC. Last season he was loaned out to Hyderabad FC during the middle of the season.

Even though a handful of players have left the club, we have made sure to find proper replacements for them. Along with all the new signings we expect some of our academy boys to make it into the senior team with their abilities displayed during the Indian Oil Durand Cup this year.