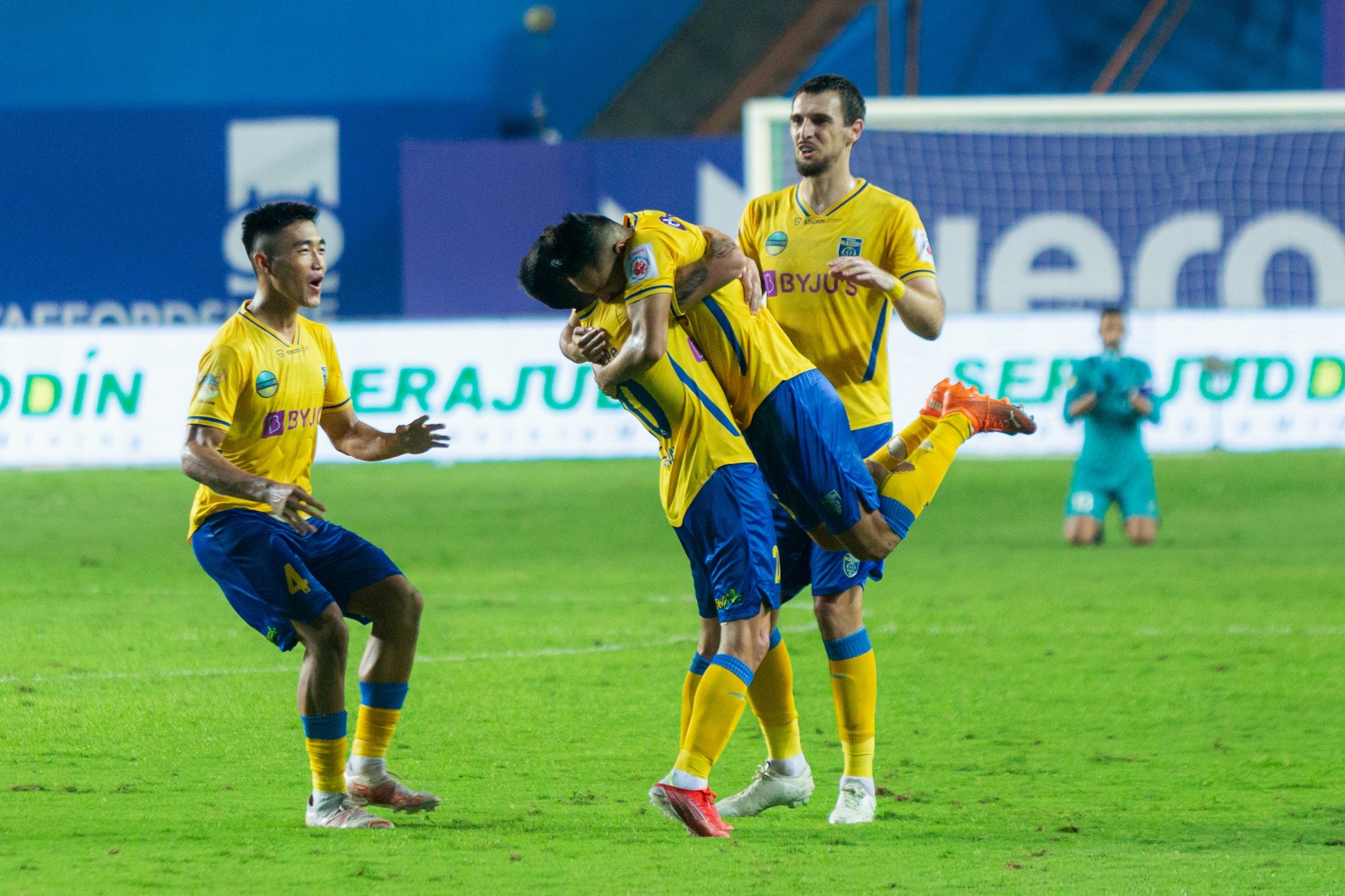 Kerala Blasters clinched an exquisite win against Mumbai City FC in the crucial match of the season(3-1). A brace from Alvaro Vazquez and a first-half goal from Sahal ensured us three points. Diego Mauricio scored the solitary goal for the visitors from the spot.

Ivan Vukomanovic made two changes in the starting eleven with Sahal replacing Vincy and Sandeep replacing Khabra. It was Mumbai who got things underway in the Tilak Maidan and both teams were eager to score the first goal. KBFC dominated the first half and the quick one-two passes created a lot of threat in the opposition box.

Sahal Abdul Samad broke the dead-lock through a goal which showed his ability and talent. He dribbled past Mumbai defenders with ease and produced a shot in between the legs of Mourtada Fall and Mehtab Singh. Goalkeeper was already beaten and he had no chance of saving it. The much awaited goal gave Blasters more confidence to push forward and Mumbai was also creating chances at the other end to equalize.

Alvaro Vazquez got an opportunity to double the lead from Adrian Luna’s corner, but his shot was saved by the Mumbai defence. Just before the interval, the Spaniard scored his first goal of the night from the spot. He was fouled inside the box by Islanders’ skipper Fall and the referee pointed his finger to the spot without any hesitation. Alvaro amped up for the penalty and did his job perfectly.

In the initial minutes of the second half, Blasters searched for the third goal to kill the game off, but nothing came out of the efforts. Alvaro’s second of the night came from Nawaz’s mistake. The Spaniard was putting up a lot of pressure for the Mumbai defence earlier also. Nawaz made a mistake and his miss-kick was caught by Alvaro who just tapped in the ball to the net. Mumbai’s solitary goal came from Diego Mauricio’s penalty kick. The Islanders were awarded a penalty for Hormipam’s touch on Mauricio and he converted the penalty-kick to goal.

After reducing the lead, Mumbai looked more dangerous with their attacks, but our defense stepped up and Gill supported his defensive line with proper outings and saves. In the eighty first minute, Blasters was awarded with a free-kick outside the box and this time Luna got ready for the kick. He whipped the ball towards the net, but the goalkeeper got a hand on it. He spilled the ball and Rahul, who came in for Sahal, provided a pass to Vazquez but he failed to surpass the keeper. Six minutes were added on to the second half and Blasters played an impressive game in the final minutes to keep the score at 3-1.

An important win in this game has taken KBFC to a possible play-off spot. KBFC stands fourth in the league table with 33 points from 19 games. Blasters will square off with FC Goa on 6th March, in another crucial game of the season.