Jeakson Singh represented the Indian team in the FIFA U-17 World Cup in 2017. He created history as he scored India’s only goal of the tournament in a group match against Colombia. The former Minerva Punjab FC youth player joined Indian Arrows on loan during Hero I-League 2017-18. After joining Kerala Blasters FC in 2018, he rejoined Indian Arrows on loan for the 2018-19 season as well. He made his Hero ISL debut in the 2019-20 season with Kerala Blasters FC and played 13 matches for them. He continued his run in the first team in 2020-21, adding 16 more appearances to his tally besides scoring his first goal in the league. 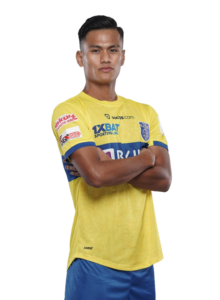