Sahal Abdul Samad joined Kerala Blasters FC back in 2017 and rose rapidly through the side’s reserve team. After making his Hero ISL debut in 2017-18 with the Blasters, Sahal enjoyed a breakthrough campaign in 2018-19, winning the ISL Emerging-Player-of-the-Season award. His impactful performances also earned him a national team call-up and eventually a debut at the 2019 King’s Cup in Thailand. Sahal was also awarded the AIFF-Emerging-Player-of-the-Year award. Under Eelco Schattorie in Hero ISL 2019-20, Sahal received less game time, appearing in all 18 matches for Kerala Blasters FC but mostly from the bench. After signing a contract extension with the Blasters, Sahal made 14 appearances and assisted three goals in Hero ISL 2020-21. 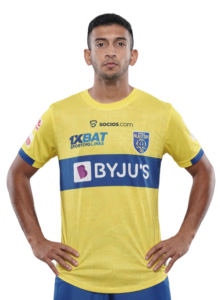