Rahul Kannoly Praveen (born 16 March 2000), commonly known as Rahul K P, is an Indian professional footballer who plays as a winger or striker for Indian Super League club Kerala Blasters.[1] He has represented the Indian national team at various youth levels including the 2017 FIFA U-17 World Cup.Born in Thrissur, Kerala, Rahul played for the Thrissur district under-14 football team and later went on to play for the Kerala football team in the same age group. 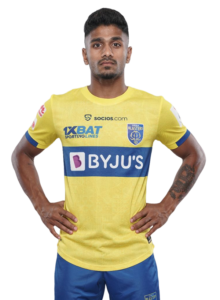