Prabhsukhan Singh Gill had a stellar Hero I-League 2018-19 season for Indian Arrows. He also emerged as the team's hero during their memorable victory over Kerala Blasters FC in the 2019 Hero Super Cup qualifiers. The goalkeeper, who followed in his elder brother Gursimrat Singh Gill’s footsteps by joining Bengaluru FC before the 2019-20 season, was also a part of the 21-man India side for the FIFA U-17 World Cup in 2017. He joined Kerala Blasters FC ahead of the 2020-21 season. 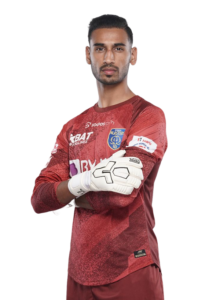