Nishu Kumar started his footballing journey with Chandigarh Football Academy. In 2015, he was signed by Bengaluru FC. After making his Hero ISL debut in 2017-18, he went on to help the side win the 2018 Hero Super Cup and then played a pivotal role in the Blues’ Hero ISL triumph in 2018-19. His stellar performances also saw him earn a national team call-up as he made his India debut in a friendly against Jordan. After another solid season with Bengaluru FC in Hero ISL 2019-20 where he played 18 games, Nishu moved to Kerala Blasters FC ahead of the 2020-21 Hero ISL campaign. In what was an injury-riddled season, Nishu bagged one assist in nine matches for his side. 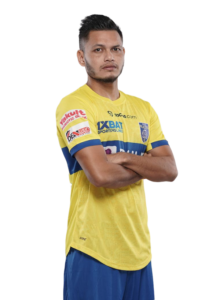