Karanjit Singh (born 8 January 1986) is an Indian professional footballer who plays as a goalkeeper for Indian Super League club Kerala Blasters.Born in Hoshiarpur, Punjab, India, Karanjit started playing football at the age of 15. He was spotted at a local tournament by the former India national team head coach Sukhwinder Singh. Subsequently, he was called for JCT in 2004, where he spent six seasons. He moved to Salgaocar in 2010 and won the 2010–11 I-League in debut season. 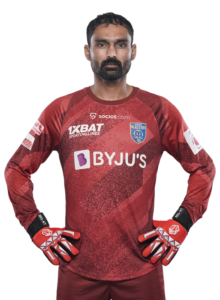