Jessel Carneiro played in the Hero I-League with Dempo SC and now-defunct Pune FC. He also captained Goa to the semi-finals of the Santosh Trophy in 2018-19. He signed for Kerala Blasters FC ahead of Hero ISL 2019-20 and established himself as an integral part of the defence. He also bagged five assists, which was the joint-most by a defender for the 2019-20 season. Carneiro had a relatively poor campaign in 2020-21, however, ahead of the 2021-22 season, he was appointed as the captain of Kerala Blasters FC. 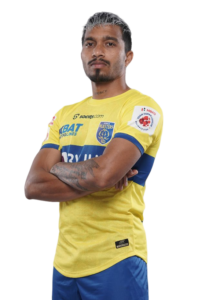