The doughty Punjabi is a street-smart footballer who rose through the ranks of Sporting Clube de Goa. From 2009 onwards, Harmanjot Khabra wore the red and gold shirt of East Bengal and also captained the side in the 2014-15 season. He won the Hero ISL in 2015 with Chennaiyin FC, a side that he represented for three seasons. Thereafter, he was signed by Bengaluru FC and he represented them in the 2017-18 and 2018-19 seasons with aplomb, helping them to finish as runners-up and Hero ISL champions respectively. He continued to be an important player for them in 2019-20, however, after an underwhelming season with the Blues in 2020-21, he joined Kerala Blasters FC. 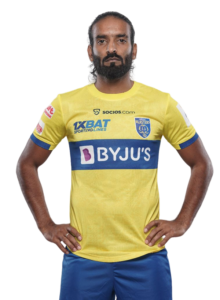