Givson Singh began his football journey with Punjab FC, where his outstanding performances paved the way to the India youth set-up. In 2016, he was brought to All India Football Federation’s Elite Academy where he spent three years before progressing to Indian Arrows. He was an integral member of the U-16 Indian national team that reached the quarter-finals of the 2018 AFC U-16 Championship in Malaysia. He also represented the national U-17 team and made his U-19 debut against Russia in an international friendly in 2019. In the 2019-20 Hero I-League season, the talented midfielder contributed two goals and two assists in 16 appearances for Indian Arrows. He made three appearances for Kerala Blasters FC in the 2020-21 Hero ISL season. 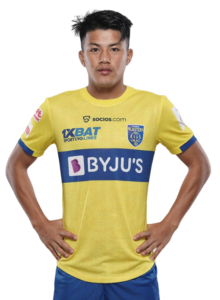