Bidyashagar Singh, who came through the Tiddim Road Athletic Union FC youth system, joined East Bengal in 2016. He first came into prominence when he took the Kolkata side’s U18 team to the final of the 2016-17 U18 Hero I-League, scoring six goals, including in both semifinals and final. He was promoted to the senior team and made his mark in the 2019 Durand Cup, scoring twice in a 2-1 win over Bengaluru FC in the group stage. After making just 11 appearances in the Hero I-League across two seasons, he returned to TRAU in 2020 and his 12 goals, including two hat-tricks, took his boyhood side’s Hero I-League title challenge to the final match day, with the team eventually finishing third in the standings. Comfortable playing on either flank, Bidyashagar became only the second Indian to pick up the Hero I-League Golden Boot in 2020-21 and in doing so, became only the fourth Indian to finish top scorer of a National League after Bhaichung Bhutia, Raman Vijayan and Sunil Chhetri. He was also named the ‘Hero of the Season’ and found a place in the Hero I-League ‘Team of the Season.’ In July 2021, he joined Hero ISL side Bengaluru FC. 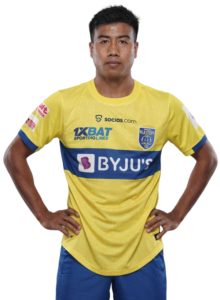